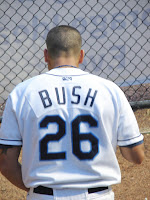 WFLA-8 Tampa is reporting this morning that Rays minor league pitcher Matt Bush was arrested yesterday on several charges stemming from a DUI accident in Port Charlotte. Bush is accused of striking a motorcycle on US-41 in Port Charlotte and then leaving the scene of the accident. The motorcyclist was flown to Lee Memorial where he is in serious condition. Bush was later captured in North Port and charged with leaving the scene of an accident with serious injuries, driving with a suspended license, DUI with serious injury and DUI with property damage.

He has been charged with seven counts: 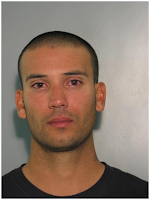 These are the initial charges which are subject to change as additional evidence is obtained. They could be reduced, enhanced, dismissed, or new charges could be filed after further investigation. The condition of the victim is the most obvious factor which could lead to additional charges.

The initial appearance to determine who will represent him and other preliminary matters was scheduled for this morning but has been continued to Saturday, March 24th, at 8:30 am. His arraignment is scheduled for May 21st at 9:00 am.

He will remain in jail without bond at least until the initial appearance tomorrow morning. A bond amount could be set at that hearing.
-- By Donten Photography at 5:47 AM
Email ThisBlogThis!Share to TwitterShare to FacebookShare to Pinterest