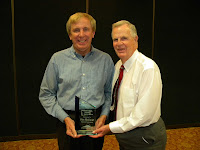 Jim Holland, the Princeton Rays general manager was awarded the 2010 Appalachian League Promotional Award of Excellence. Jim received the award on Wednesday at the Appalachian League Fall Meeting. The annual award is given to the team executive who best promotes their team.

This was the third time he has won the award, having won the award in 2002 and 2005 also.
-- By Donten Photography at 5:58 PM
Email ThisBlogThis!Share to TwitterShare to FacebookShare to Pinterest