This is going to be a shorter post than I wanted especially since Mitch Talbot got traded to the Indians. And also because only 93(!) pitches were recorded by pitch f/x from these three pitchers combined, which is somewhat disappointing considering over half of the pitchers who pitched in the Arizona Fall League had over 100 pitches recorded. However, the data is still useful namely the pitch movement and pitch types in pretty graphics.

I decided not to provide a table of the basic pitch f/x stats like O-Swing and Whiff considering the very small sample size of the data which only recorded an appearance or two. But the following table is important since it shows the average movement, spin, and the velocity. 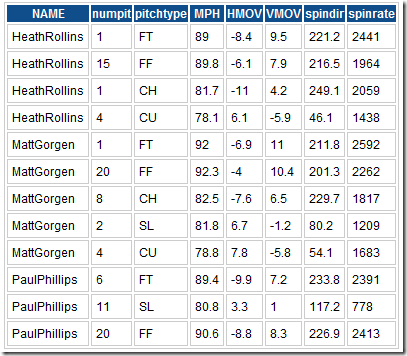 Now for the player by player graphs:

Matt Gorgen- A short pitcher at 6-0, Gorgen can generate decent velocity on the fastball and features a change,slider, and a curve. With those pitches, he produces a lot of Ks in his short career in the Minors. Here are two graphs, the first is the basic horizontal and vertical movement, and the next is the spin direction versus the pitch speed (All classifications are Gameday’s): 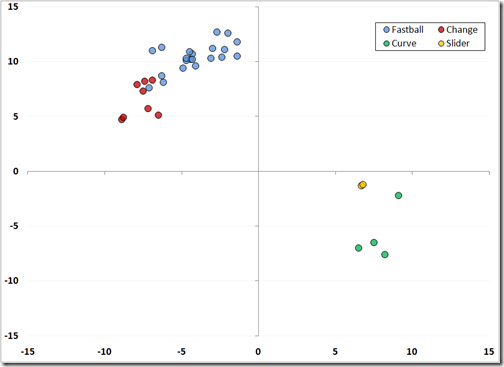 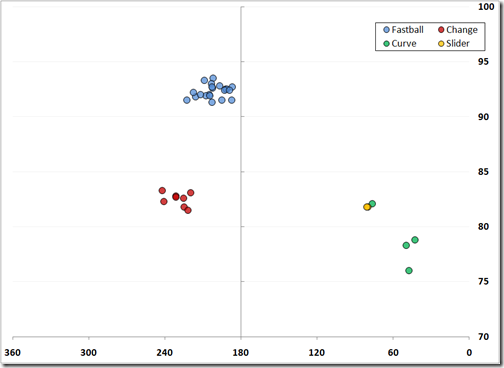 Not sure if everyone who reads RaysProspect is efficient in pitch f/x so I will provides some links to help you with that at the end of the post. The first graph shows that Gorgen probably throws both a four and two seam fastball. Gorgen supposedly throws a plus slider but the two sliders classified(one mis-classified) are little slurvey which is evident in the velocity being less than 10 mph off the fastball. But that doesn’t mean it is bad. It is just is more like a Sabathia slider. The changeup is supposed to be a plus pitch as well, which is very likely as it has some nice tail off the fastball.

Heath Rollins- Rollins only had 21 pitches recorded in Arizona. 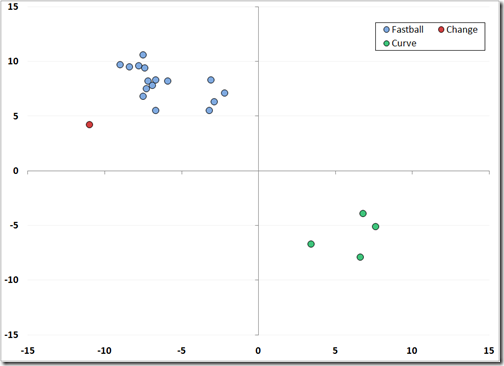 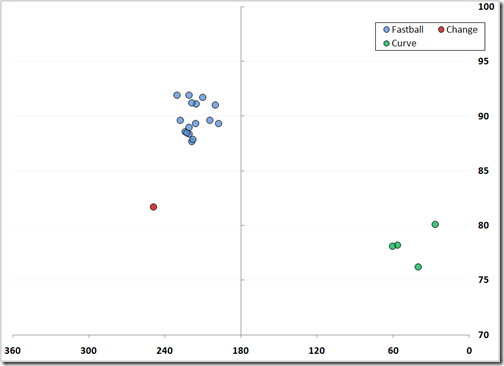 Pretty basic stuff. His fastball ranges anywhere from 88-92 mph. Hard to discern is Rollins what type of fastball Rollins throws, he could throw mainly two-seamers, or it could be his four-seam that is being thrown from a low arm angle. Only one change that had excellent tail, but one. Rollins’ curve is hard separated 8-12 mph from the fastball and with moderate break. Very similar to Wade Davis’s curveball.

Paul Phillips- The senior of the group. 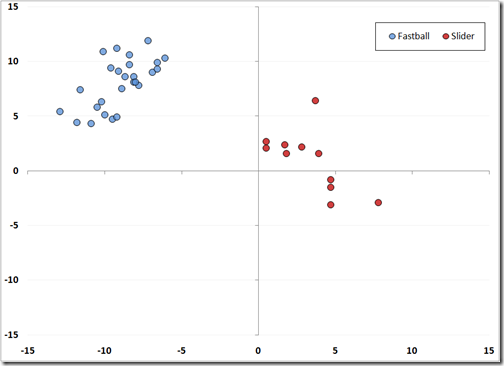 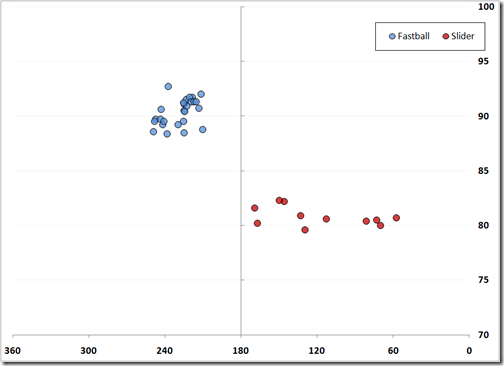 Reminds me of Dale Thayer. A low arm angle, tailing fastball, and a slider that varies in break. And by watching this video, he looks to be a slinger so command of his slider might not be above average. Not a top prospect, but a possible Dale Thayer type pitcher several years down the road.

Arm angles- I have been tinkering with this over at my personal blog. Here are the approximate arm angles of these three pitchers using pitch f/x data. 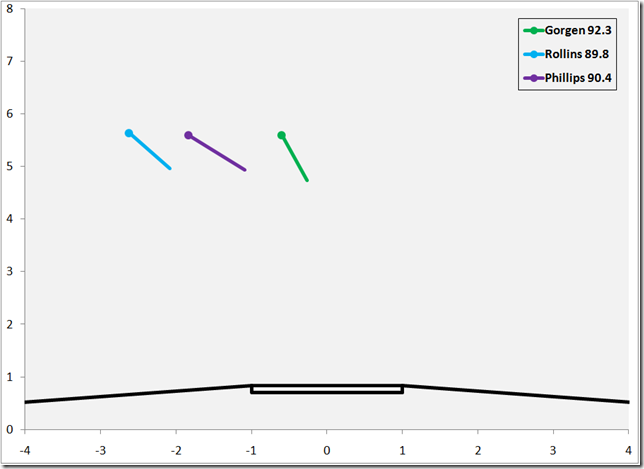 Remember that these release points are recorded 50 feet from the front of home plate so that there aren’t the exact release points. I usually like to see video to confirm these angles which we do have for these three pitchers and they show (to me anyway) that the above arm angles are pretty accurate.

Harry Pavlidis’s work on the Arizona Fall League (more links in the article).

Email me (rzar@hotmail.com) if you have any questions or place them in the comments.

-- By Cool at 8:04 PM
Email ThisBlogThis!Share to TwitterShare to FacebookShare to Pinterest