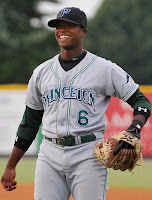 One of the most highly regarded prep bats in recent years and a 5-tool true shortstop, the Rays selected Tim Beckham with the first overall pick of the 2008 draft. Eager to begin his playing career, the Rays and Beckham agreed to terms on a deal that included a $6.15 million bonus a mere two weeks after the draft, allowing Beckham to begin his career at rookie level Princeton.

Statistically, Beckham struggled at the plate in 46 games for Princeton. Batting .251 with an OBP of .296, Beckham had just 14 extra base hits including two homers. He struck out in 21.7% of his plate appearances and walked only 5.8% of the time. While these numbers certainly are not great, it is very encouraging that he held his own against professional pitchers in his first taste of pro ball. Furthermore, Beckham showed improvement throughout the year; his OPS increased each month from .494 in June, to .605 in July, culminating with .747 in August. He earned a late season call up to Hudson Valley, where he appeared in just 2 games.

Rookie league numbers aside, which should be taken with a large grain of salt, there are plenty of reasons to be excited about Beckham’s future. He projects to be an above average hitter at a premium position. Blessed with quick wrists, Beckham generates tremendous bat speed, which could translate into above average power down the road. He does have some minor mechanical flaws in his swing, but those will be ironed out in time as he develops and adjusts to the pro game. Beckham extended his season and continued his development by attending the Rays’ fall Instructional League.

Beckham has all of the tools in the field to be a plus defender at short. Soft hands and good actions in the field coupled with an above average arm should allow Beckham to stay at shortstop as he progresses. His above average speed and baseball instincts will provide him with plenty of range for the shortstop position. Good speed will also allow him to swipe some bases although he’s not likely post huge stolen base numbers in the majors. Beckham’s makeup is also plus, as he always displays enthusiasm for the game, frequently smiling and laughing with teammates on the field.

Beckham should start 2009 with the Rays’ new Class A affilliate in the South Atlantic League, the Bowling Green Hot Rods. He’s certainly one to keep an eye on in 2009 as he begins his first full season of professional ball.

-- By Andrew Leslie at 5:27 PM
Email ThisBlogThis!Share to TwitterShare to FacebookShare to Pinterest