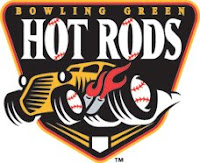 The Bowling Green Hot Rods have an interesting opening night promotion: "The Hot Rods are looking for local hot rods, muscle cars and classic vehicles to feature on Opening Night, April 17th, 2009. Ten hot rod owners will drive their cars around the field, ferrying players into the park for the team’s historic first game. If your car is selected, you will receive two tickets to our Inaugural Season Opening Night game and the opportunity to showcase your vehicle in front of thousands of fans. Winning owners will also have a picture of their car featured on our website. One grand prize winner will be featured in the Hot Rods opening video, which will air on the video board at Bowling Green Ballpark before each game."

The Princeton Rays had had Meet the Manager Night last night. Brian Woodson of the Bluefield Daily Telegraph spoke to first-year manager Jared Sandberg about his playing career: "I was forced to retire due some health issues with my eyes," said Sandberg, who drove in a league-leading 68 runs with Princeton in ’97. "It’s unfortunate. I have a rare eye disease, but I think it all works out in the end, and all for the better."

Sandberg on his managing ambitions: "When I was getting into coaching, one of my goals was to be a manager one day, but I didn’t realize it would be so soon," Sandberg said. "Why would I be sitting here if I didn’t want to make to the next level or move up through the minor leagues? I don’t think anybody is going to sell themselves short and just want to be a AA manager. We all want to get back to the big leagues. I definitely want to be a big league manager some day."

Jino Gonzalez' arraignment is scheduled for February 19th at 8:30 a.m. before Judge Tharpe in Hillsborough County Circuit Court. The Rays 46th round pick in the 2002 draft, who pitched for the Montgomery Biscuits (AA) last year, was arrested January 4th at Tampa International Airport. He was charged with one count of carrying a concealed firearm, a 3rd degree felony, and released the same day on a $2,000 surety bond. So far no defense attorney is listed on the docket.

Marc Topkin reports that Mike DiFelice has retired: "C Mike DiFelice, who played seven games for the Rays but spent most of the year at Triple-A Durham, officially retired as a player and will manage the Mets' rookie-league team in Kingsport, Tenn."

Gary Armida at FULLCOUNTPITCH.com compares the pitching staff's of the Rays, Red Sox, and Yankees: "You’re probably thinking, “Ok, so who has the advantage?” The Tampa Rays seem to be the club with the most disadvantages heading into the season. For the first time in franchise history, they will start a season with expectations. More importantly, their pitchers are all coming off of a career high in innings. For that reason alone, their staff seems likely to take a small step backwards in 2009. They will still be competitive, but they will be more reliant on the bullpen which is a negative. The small step backwards will be enough to rank below both the Red Sox and Yankees. The Rays’ rotation does, however, have the biggest upside in the division."

Lincoln Hamilton of Project Prospect takes a look back at the Top College Bats of 2006-2008 and has this to say about Evan Longoria: "Evan Longoria was a late bloomer in college. Undrafted out of high school, Longoria attended a junior college his freshman year. He then sprouted two inches, added 25 pounds of muscle and became an LBSU Dirtbag where he struggled as a sophomore. It really wasn’t until the summer before his junior year when Longoria showed well in the Cape Cod league and became an uber-prospect. My system is set to be skeptical of players who see a major jump in performance (Stats 101: outliers usually aren’t sustainable). However, we’re looking at a unique talent and a system based largely on similar players will always underrate ballplayers of Longoria’s caliber."

Paul DePodesta comments on the Padres signing of Cliff Floyd: "We've been talking for a number of weeks internally about the need to add a left-handed bat into the mix, as our bench was looking awfully right-handed. In an ideal world, we wanted to find a guy who could provide three primary skills: 1) the ability to do damage against RHP as either a pinch hitter, DH or occasional starter, 2) the ability to play somewhere other than 1B if need be, and 3) the ability to act as a leader for our younger players. We found a match in Cliff."

Fantasy Pitch F/X has added a new feature called Injury Tool. It's basically a database of disable list transactions by player. Type in the words "Troy" and "Percival" in the search box to see how comprehensive it is.

Bill Chastain weighs in on the Rays #5 starter options: "However, the possibility also exists that Price -- who everybody knows has front-end-of-the-rotation stuff -- could begin the season at Durham, where he would be able to tweak his changeup just enough to where he will never be sent down once he's with the Rays. If that does happen, either Niemann or Hammel could assume the No. 5 spot to start the season and the other could work as the team's long man in the bullpen. Should Price begin the season at Durham, it's likely he would make only a handful of starts before he returned. But the Rays would be buying time by making such a move, which would allow the team to showcase both Hammel and Niemann to other teams to get something in return via a trade rather than having another team claim them."
-- By Doug at 12:33 PM
Email ThisBlogThis!Share to TwitterShare to FacebookShare to Pinterest