The Rays minor league teams have had a pretty good week overall. 15 wins and 11 losses make up for a 57.7 winning percentage. Especially the Stone Crabs have been on a tear as of late. Their team OPS improved by nearly 5 points (from .644 to .692) from the 29th of April to yesterday. Looking at the pitching, we can see that Montgomery and Port Charlotte (while still being worst in the Southern League) improved by a significant margin over the last week while the Hot Rods' pitching continues to decrease from the very high level it showed at the beginning of the year and while the Durham Bulls' pitching remains historically bad. It can be seen that the pitching level decreases with each minor league level.

As sample sizes are still pretty small, I won't comment on pitchers with less than 20 IP. Here is the list: 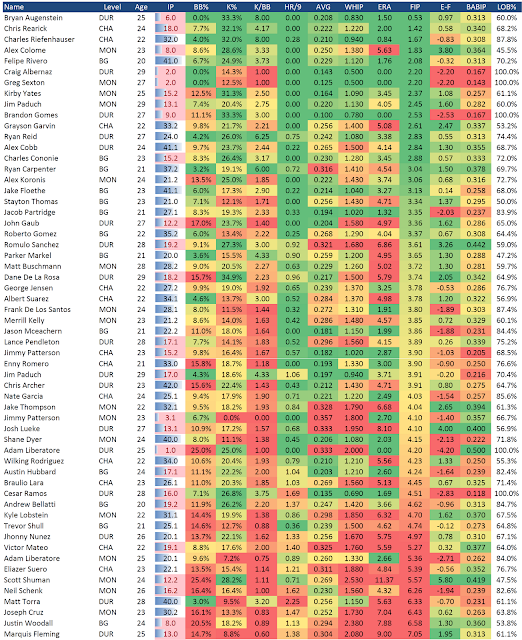 (click on the image for a better view)
Prospects on the rise
Prospects to be falling
Glossary
All of the stats provided above are excluding the stats from the previous day. I preferrably use FanGraphs as source for the stats. Click on each stat for its explanation:
-- By BurGi at 12:16 PM
Email ThisBlogThis!Share to TwitterShare to FacebookShare to Pinterest