PORT CHARLOTTE, Fla. – Despite some help from a few big league relievers, the Charlotte Stone Crabs fell to the Frederick Keys (Orioles) 2-1 on the back fields at Charlotte Sports Park on Saturday afternoon.

Tampa Bay Rays relievers Rafael Soriano, Dan Wheeler and Grant Balfour each pitched an inning to start the game for the Stone Crabs with Soriano and Balfour recording perfect frames. Wheeler gave up two hits and allowed two runs but neither was earned.

The Stone Crabs bats were quiet, but right-hander Nick Barnese gave a strong performance backing up the Major League relief corps. He gave up just one run in five innings of work while striking out four and retiring the last 10 batters he faced.

The minor league affiliates will take a break from games tomorrow with a camp day for the entire farm system, and the Stone Crabs will then matchup against the Fort Myers Miracle at Lee County Sports Complex in Fort Myers at 1:05 p.m. on Monday. 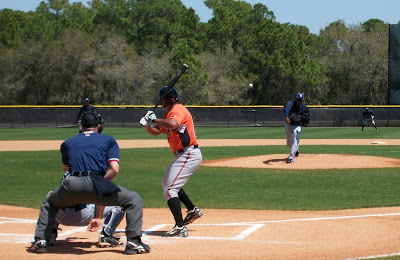 On Major Leaguers relievers in today’s game:
“They’re very cordial to the minor league guys. It’s always fun to have those guys down here. The young guys definitely look up to them.”

On Nick Barnese:
“He looked good today. He was working on some mechanical changes, but he was working ahead in the count and was pounding the zone. He threw a lot of first-pitch strikes.”

Stone Crabs co-owner and former Hall of Fame shortstop Cal Ripken, Jr. will return to Charlotte Sports Park for Opening Night on Thursday, April 8. A small amount of reserved seats are still available for the game in addition to general admission seating that starts at just $6 for advance purchases. Call 941-206-HITS to reserve seats or visit StoneCrabsBaseball.com for more information.
-- By Doug at 4:59 PM
Email ThisBlogThis!Share to TwitterShare to FacebookShare to Pinterest