The Game: Thanks to two first inning runs, the GCL Rays improved to 4-3 with a 2-1 victory over the visiting GCL Orioles. Brad Furdal (1-0, 2.35) was the winning pitcher and Elvin Perez picked up his third save of the season.

Furdal pitched 5 shutout innings, allowing 4 hits and 1 walk, striking out 5. Jose Molina took over for Furdal, pitching 3 scoreless innings, only allowing 1 hit. Luis Yendis got the first two outs of the ninth, allowing a run to score. Perez came on and got Xavier Lopez to fly out to Ruben Contreras to end the game, leaving the tying run at third base. 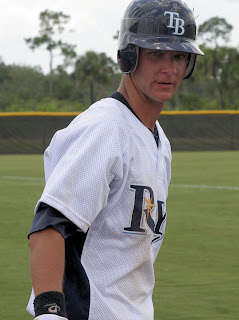 Catcher Geraldo Olivares and designated hitter Travis Simas (pictured) drove in the runs for the Rays. The Rays once again struggled to garner extra base hits, with Simas and Ruben Contreras getting the only two of the game on doubles. Both of the Rays runs were unearned to Orioles starter Eiri Ramirez, who only allowed the two unearned runs in 7 innings of work. His defense didn't help him, commiting 4 errors. The Rays didn't commit an error.

What Went Right: DH Travis Simas was 1-2 with a double and an RBI. Brad Furdal threw 5 shutout innings, striking out 5. Jose Molina pitched 3 innings of scoreless relief and only allowed 1 hit.

What Went Wrong: LF Hunter Pace was 0-4 with a strikeout. 2B Felix Gonzalez was 0-3 with 2 K's. Relief pitcher Luis Yendis lost the shutout for the Rays and struggled thru 0.2 innings of work, allowing a hit and 2 walks and 1 earned run.

The Road Ahead: The Rays will play the GCL Reds on the road tomorrow in Sarasota. Victor Mateo (1-0, 1.80) is the probable starter for the Rays, although you can never guarantee anything in the GCL.

-- By Nick Hanson at 4:44 PM
Email ThisBlogThis!Share to TwitterShare to FacebookShare to Pinterest