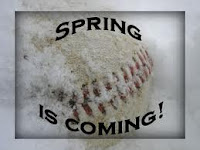 The power is finally back on, now just have to clean up a flooded basement and do a thousand loads of laundry. And they are forecasting 7 inches of additional snow by Sunday morning. But I promised a weekend open thread, so here it is. Also, sorry for so few posts this week, hope you understand why.

As always, I'll start: We love to talk about the June draft around here, and apparently many of you do too. With the collective bargaining agreement between the teams and the union set to expire after this season there has been a great deal of speculation that the new CBA will include many changes to the draft. Some of the ideas floating around include allowing teams to trade picks, making it a world-wide draft (currently only US, Canadian, and Puerto Rican players are eligible), and hard-slotting for bonuses (if you're picked #x you get $y).

What do you think about these three ideas, particularly from the Rays smaller-market point of view? Are there any other changes you would like to see made, for instance a lottery system for the top 10 ten picks like in the NBA, so that the team with the worst record isn't guaranteed the #1 overall pick? Also feel free to post any questions you may have about the draft process.

Have fun, and stay warm!
-- By Doug at 2:59 PM
Email ThisBlogThis!Share to TwitterShare to FacebookShare to Pinterest