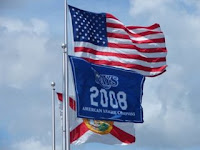 Time to catch up on some things from my inbox from the past few weeks. Newer items are towards the end.

Speaking of the draft, here are a few of the changes for 2012:

- The draft will be June 4th-6th (Monday-Wednesday).

Every pick in the first 10 rounds is assigned a value, which ranges from $7.2 million for the No. 1 overall choice to $125,000 for the final pick in the 10th round. Those values are totaled to determine each team's draft pool. If a club exceeds its draft pool, it will receive penalties ranging from a 75-percent tax on the overage (for a 0-5 percent overage) to the loss of two first-round picks and a 100-percent tax on the overage (for an overage of 15 percent or more). After the 10th round, teams can sign players for up to $100,000 without it affecting their draft pool. Any bonus money over $100,000 will count against the draft pool.

The Durham Bulls will host Fan Fest 2012 on Friday, March 2nd and Saturday, March 3rd from 11:00am to 2:00pm at the Durham Bulls Athletic Park. This will be the first chance fans have to purchase individual game tickets.

One area that the Rays lack upper-level depth is left-handed relievers. After Cesar Ramos, Jake McGee and J.P. Howell the only real option is starter Alex Torres, who will begin the year in the Durham rotation. After Torres the next group of in-house options get a little scary: Frank De Los Santos, Neil Schenk, and Sergio Espinosa. Let's hope none of the southpaws get hurt in Spring Training.

Remember Christian Lopez, the Rays 6th round pick in the 2003 draft? After six seasons in the organization he was released in 2009 and has played indy ball the past couple of years. He's also pursuing a dream to become a Spanish soap opera star by appearing on a reality show called Sweet Home Alabama:

The third season of the dating reality series kicked off last Friday with a special two-hour premiere that introduced the 27-year-old Lopez as one of 22 suitors vying for the love of southern belle Paige Duke, the former NASCAR Sprint Cup Series spokesmodel from South Carolina.
...
“I’m pretty much not worried how they’re going to portray me,” he added. “The whole time I was up there, I was just myself. I’m a cool guy. I get along with everybody so I’m really not afraid of how I’m portrayed. It’s hard to make me look bad.”
...
What was completely real was Lopez’s brief on-one-one time with Duke during last Friday’s season premiere. The show called them speed dates for each of the suitors. He cracked a joke with Duke when she said her experience dating athletes is they are players. He retorted by saying he’s a “baseball player.” He then added that it’s important to pick the right athlete that’s not a player with the women and that his previous three girlfriends were Cuban.

Shockingly, he did not win.

Home town media sometimes exaggerate the likelihood a player will become a major league star or their exploits from the past. I may be wrong, but I think this quote might fall into the latter category:

Brandon Guyer played baseball at the University of Virginia from 2005 to 2007, and started 171 of the 172 games he played in. After leading the Cavaliers in hits, home runs, and total bases his sophomore and junior seasons, the Chicago Cubs selected the outfielder in the fifth round of the 2007 draft. Brian O'Conner, UVA's head baseball coach says, "Brandon was such a competitor when he played on this field. I remember many times that he would run through that wall in left field to make a catch."

The first baseman and designated hitter spent that last five years in the Atlantic League with the Somerset (N.J.) Patriots. With the five-time champions, Pressley has amassed a .308 batting average, scored 310 runs, had 594 hits, 121 doubles, 96 home runs and 378 RBIs in 545 games played from 2007-2011. Drafted by Tampa Bay out of Westminster Academy in Fort Lauderdale, Fla., in 1998, the 31-year-old right-hander said he is looking forward to playing with the Skeeters this spring.

Like many other pitchers that have taken the mound for the P-Rays over the past five seasons, Henderson can give you a two-word answer as the reason he showed progression during his time here: Marty DeMerritt.

"I enjoyed him a lot and talking with him about a lot of things. He changed some things with my windup and some other minor mechanical flaws. I just had to build repetition with these new techniques. By becoming able to recognize my mistakes and why they happened, it got to the point that I could correct myself immediately when a ball didn't go the way it should have," shared Henderson about DeMerritt's impact on his abilities on the mound.
...
"I have spent the winter so far trying to get a little stronger as I got a little tired toward the end of last season. I have just started [late January] consistently throwing to get my arm strength ready. It doesn't matter where they send me in 2012. I'm just planning to have a good year wherever it is," Henderson concluded.

RHRP Brooks Belter (25th round, 2011) has signed with the Traverse City Beach Bums of the Frontier League. He had a 3.58 ERA over 32.2 IP with 29 strikeouts for Hudson Valley last season.

Over at FanGraphs our friend Steve Slowinski tried to project Matt Moore's 2012 season by comparing him to past top-rated pitching prospects:

Second, almost without exception, the pitchers selected as the top pitching prospect for the year have performed exceptionally upon reaching the majors — well, except for the Rays’ David Price and Jeremy Hellickson. Is there some sort of Rays-related conspiracy going on here? To be fair, Matt Moore is a more refined pitcher right now than David Price was in 2009, and he has more dominating stuff than Jeremy Hellickson. Instead of going the way of the Rays other top picks, I could see Moore challenging Scott Kazmir (3.8 WAR, 2005) for the title of best rookie starter in Rays history.

There were several Rays items in today's Baseball America Top 100 Prospects chat, here is one:

cy (western Mass.): Fabulous work, gentlemen. Thank you. Always looking to the future, did Enny Romero receive consideration for this list? Does he have the potential to be a fast riser? Thanks.

All 38 pitchers and catchers invited to major league Spring Training reported and worked out by Tuesday. Several pitchers threw their first bullpen sessions, including: Jeremy Hellickson, Jeff Niemann, Kyle Farnsworth, Jake McGee, Burke Badenhop, Josh Lueke, and Brandon Gomes, who is recovering from a back procedure.

I'll post more notes in Part 2 tomorrow.
-- By Doug at 11:07 PM
Email ThisBlogThis!Share to TwitterShare to FacebookShare to Pinterest