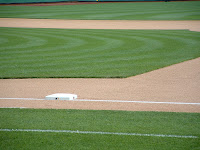 First baseman Carlos Pena reported and worked out today, becoming the 54th player in camp ahead of the Saturday deadline. Five players have yet to report: 2B Ben Zobrist, SS Hak-Ju Lee, OF Brad Coon, OF Jesus Feliciano and 1B Juan Miranda.

The MLB Network announced today that it will broadcast five games televised by the Rays opponents: March 6th vs. Minnesota, March 7th at the Yankees, March 10th at Boston, March 26th at Minnesota, and April 1st at Baltimore. Those games are in addition to the six games previously scheduled to be shown on Sun Sports and ESPN. The Sun Sports games are March 15th vs. Philadelphia, March 18th vs. Boston, March 25th vs. the Miami Marlins, and March 31st vs. Boston. The two games on ESPN are March 21st vs. the Yankees and March 29th at Philadelphia. So in total 11 of the Rays 32 Grapefruit League games will be televised.

Some videos of Manager Joe Maddon and RHRP Kyle Farnsworth from today provided by the Rays:

-- By Doug at 8:51 PM
Email ThisBlogThis!Share to TwitterShare to FacebookShare to Pinterest