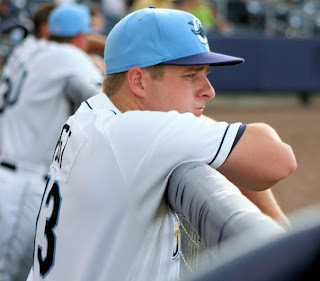 RaysProspects.com is happy to announce what will hopefully become a regular feature to the site. Stephen Vogt has agreed to answer any questions readers may have about his life as a player in the Rays organization.

Vogt was drafted in the 12th round of the 2007 draft out of Azusa Pacific University. He played for the short-season class A Hudson Valley Renengades after the draft in '07, where he led the team in plate appearances (279), hits (72) and RBIs (48), and posted a .300 batting average. He was also among the New York-Penn League leaders in the RBI category. He split time between catching, first base, and the outfield.

In 2008, Vogt advanced to class-A Columbus, hitting .291, collecting 114 hits, and driving in 54 runs. Vogt spent most of his time at first base and in left field, but also appeared in several games behind the plate.

Vogt began the 2009 season at high class-A Charlotte, again spending time in the infield and the outfield. However, his season was cut short after just 10 appearances. He suffered a season ending shoulder injury, which required surgery. However, Vogt spent the rest of the season working on rehabilitation, and is recovering well. He also made a surprise appearance as a Florida State League first base umpire during a Stone Crabs game in August, after an injury was sustained by the home plate umpire. He is hopeful to be ready to go for 2010 Spring Training.

Stephen is willing to answer any questions about his life as a minor leaguer in the Rays organization. Questions can be submitted to nick@prismpressgroup.org. The questions will be send Stephen's way, and answers will be posted soon after.

We want to thank Stephen for allowing us to delve into the life of a Tampa Bay Rays prospect.
-- By Nick Hanson at 12:12 AM
Email ThisBlogThis!Share to TwitterShare to FacebookShare to Pinterest